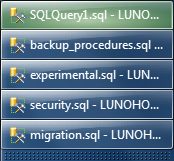 Originally SSMS displays static caption: "Microsoft SQL Server Management Studio". If you have several instances open and try to switch between them using Alt-Tab or task bar you will not be able to see the difference between instances. SSMSBoost makes it possible to redefine the caption of SSMS window so that you will be able to see current document name and connection information. You can also define your own pattern to be used as the window title.
Available parameters are: @FileName, @Server, @Database, @User. Parameters can be used within the main pattern as well as in sub-patterns {ProjectName} and {Connection}. {ProjectName} pattern will be inserted only if SSMS project is loaded. {Connection} pattern will be inserted only if connection is open.
Picture on the right shows you how different SSMS instances are displayed on the task bar. Pictures below show how the caption of SSMS looks like and how windows appear in Aero Peek.