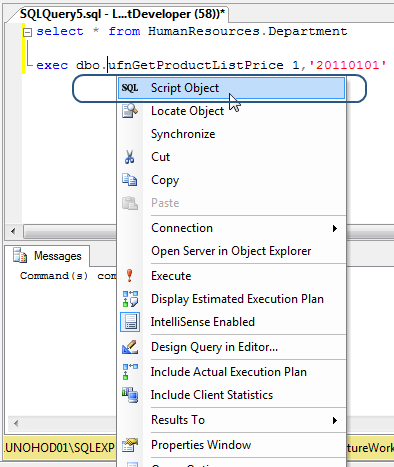 SQL Server Management Studio currently lacks a feature present in other Visual Studio Editors - "go to definition".
SSMSBoost plug-in solves this problem by adding a tool what you need: Script object located at the cursor position to a new window.

You can invoke this feature by

SSMSBoost performs search for valid identifiers at cursor location and allows you to select, which one you want to script. If you select part of the identifier - SSMSBoost will perform no search and will use selected text as object identifier.
If you would like to change the default Keyboard Shortcut for the "Script Object" feature you can do that using Shortcuts Editor feature of SSMSBoost (required only in SSMS 2008 as far as SSMS 2012 has built-in shortcuts editor).

By default objects will be scripted as CREATE. If you want to generate ALTER scripts you can use "Script as ALTER" command also provided by our add-in. Use Extras->Settings->"Shortcuts & Macros" to redefine F2 shortcut to this command.